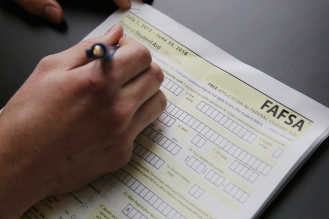 Mid-fall is a special time for many families of college-bound high school seniors, as early acceptance letters for universities are being received and I’ve been enjoying the Facebook posts of proud students announcing their plans for next year.

The experience of receiving a first-choice acceptance notice is one of the true joys of parenthood. The combination of validation and hope is hard to beat. But this moment is also closely followed by a reality check, as the financial planning component of a college education immediately goes from being a hypothetical future goal, to a real current expense.

For nearly all families of next year’s freshman class, part of the financial planning process will involve filling out the dreaded Free Application for Federal Student Aid form, known more commonly as the FAFSA.

The FAFSA is used to determine eligibility for federal education cost assistance programs such as Pell Grants and government subsidized student loans, as well as by most universities as a starting point to award institutional level financial support in the context of what is called the Expected Family Contribution, or EFC. The level of potential aid derived from the FAFSA can literally make a mission-critical difference for many families, especially when their student is bound for a high-cost private university.

So needless to say, understanding the FAFSA is vital to most families of college-bound students, and in September the government announced some important changes occurring with this process that may involve some potential planning opportunities during 2015.

The primary change will involve when the FAFSA is filed and what tax year’s information will be reported on the form. Previously the FAFSA was filed between Jan. 1 and June 30 using the prior tax year’s income and asset information. In 2016, a new earlier filing window, now beginning Oct. 1 and ending June 30 will be added. This new earlier filing window will then become a permanent change going forward.

This means for families of freshman starting college in the fall of 2016, the income and asset information from 2015 will be used to determine aid levels for both the student’s freshman and sophomore years. So with nearly three months left in 2015 to do some planning, now is the time to learn how the FAFSA works.

While a full discussion of this complicated process is beyond the scope of this column, it’s important to understand that income levels typically have the largest impact on the FAFSA aid formula. With this in mind, if it is possible to reduce income in 2015 by deferring a bonus until next year, or making some capital investments if parents own a business, or by deferring distributions from retirement plans if parents are retired, now is the time to think about this type of planning.

The FAFSA is important and intimidating. While a lot of information is available online, some parents may want to consider getting professional help for this complicated endeavor.

Be a Smart College Shopper:

Staying up late, sleeping in, resting, regrouping, and relaxing are probably on every student’s to-do list.  A break from school, whether it be high school or college, is a great respite. By all means, enjoy the time off but once you have been able to sleep in and recover from final exams, what else will you do over the break?

Consider volunteering. Winter break is a great time to volunteer in your community and allows you a chance to give back. Start a quick on-line search and you will find many organizations in your area that will be glad to have your help – homeless shelters, food pantries, churches, nursing homes, retirement homes, hospitals, animal shelters. This doesn’t need to be a huge commitment as many of them have quick drop-in hours and they’d be glad to accommodate you. They will take any help you’d be willing to give. Grab a few friends and head over to help.

Organize a food drive/clothing drive/shoe drive/personal products/ or book drive. From the comfort of your own home, create a quick Facebook page or Twitter page asking friends and neighbors to consider donating. Make it easy on everyone, and ask them to leave items on the porch or in the garage and go pick up immediately. Load up your car or truck and contact a shelter or Goodwill or a church in your community to see how your donation can make a difference.

Create a neighborhood Christmas carol group. Go on-line and find the lyrics to common holiday songs, practice before you head out with your friends. Stop by neighborhood houses and sing to your heart’s content. Make it clear that you are not collecting donations but rather doing it just to spread good holiday spirit.

Try a few random acts of kindness. These don’t need to be big ideas just something simple that will make the recipient stop and smile. Things like letting a person cut you in line, buying a stranger in line their coffee or lunch, leaving a well-loved book somewhere for someone else to pick up, putting a sticky note up on a public bathroom mirror with a comment like “you are beautiful”, taking chalk and writing an inspirational message for someone to read, sending someone a card “just because”.  The ideas are limitless.

Remember, no one can do everything but everyone can do something. So consider DOING SOMETHING over break and make those days count. Trust that whatever you give you will receive back a hundred-fold.

Average students: Where do they fit in to the whole college admissions equation?   Ask new residents how they ended up in a particular neighborhood and no doubt good schools and education will come up in the equation. You may be blessed to live in an area with high educational standards and achievement but recognize that that can be a challenge to the “average” senior who is applying to colleges. Based on what we often see cited, you would think every single kid applying to college is a 4.00 and a 34 ACT score. While much of the attention in the media focuses on the top colleges and the status of “A” and “B” students, “We should care about ‘C’ students because they’re the backbone of our country,” says Claire D. Friedlander, a college consultant at Bedford Central School District in New York and with Jewish Family Service in Stamford, Connecticut. She observes that half the students she counsels are “C” students. “That means they’re average-the guy next door, the gal next door.”

Average students often excel academically in college. Let’s face it not every student grows at the same pace. Some students who did not excel academically in high school may have not blossomed yet but still have the potential to succeed. There are schools out there that accept average students and they provide a strong educational program. So, quit worrying about other kids and focus on your own strengths and what you need to be successful. What kind of school would you thrive best in? Institutional fit must be a priority. Figure out what those are and apply to those 6-7 schools which offer the best fit. Forget about trying to get accepted to schools which might not be a good fit.

Don’t be discouraged. There is a right school out there you just may need to look in a different place to find it.

January 1 – Happy New Year’s! Don’t forget to get started on those important New Year’s resolutions – exercise more, eat healthier, get more sleep, get better organized, etc. Enjoy the day but don’t forget something very important – get that FAFSA completed. The Free Application for Federal Student Aid can be submitted on January 1st (midnight to be exact) and time is important since federal aid is given on a first-come-first served basis.

Filing the FAFSA will be much easier if you plan ahead and are organized. There are steps you can take to prepare ahead. First, have your 2012 tax return information ready. Do not wait for your tax return. You can enter estimated tax information and then go back and revise the tax information later.

Here’s a quick list of documents you will need available for completing the report:

If this will be your very first time filing the FAFSA online you are going to need an electronic PIN. If you haven’t already done so, apply for your FAFSA PIN now at http://www.pin.ed.gov/. Keep this PIN handy. You will reuse this PIN every time you want to access your FAFSA or your SAR (Student Aid Report), and you will reuse it every year that you apply.

Filing the FAFSA is about as much fun as filing your tax returns but don’t overlook the importance of doing so. Plan ahead so you are ready to go January 1, 2013.